AllinAllSpace
Home Economy Here’s Why the Israeli Shekel is One the Strongest Currencies in the...
Facebook
Twitter
Pinterest
WhatsApp
Reading Time: 3 minutes
Not many people around the world are aware of the fact that one of the strongest, if not the strongest currency in the world over the last years is… the Israeli Shekel. That is, of course, if we take aside Bitcoin. For the question of why the Israeli shekel is such a strong currency, economists always answer that Israel has an excess of exports to imports, which are flowing from overseas investments, and generally the Israeli economy constantly grows stronger.
All of this is true, but the real question is not why the ILS is strong, but why is it one of the strongest currencies in the world! Over the last few years, the shekel was strengthened in relation to US dollars and other leading currencies and remain stable at all times, even in times of minor conflict with the Palestinians, as happened early on this year.

What Happened to the Israeli Economy?

Indeed, there is a large amount of change in Israel’s trade account (excess exports on imports). However, it is somehow very to other countries such as Switzerland, Singapore, Thailand, Norway, Korea, and others. What’s more, foreign investments in Israel are fairly high (in relation to GDP), but in Hong Kong, Ireland, Holland, Chile, and other countries the amount is even higher or at least similar to Israel.

By the way, exports that exceed imports or large foreign investments, obviously, weaken the demand for shekels. The changes in the exports of an Israeli company in many cases do not pass the local foreign market. For example, the export of Israeli hi-tech companies, many of which belong to global companies, only in part, are usually sold in US dollars converted to Shekels. It is also very unlikely that the Israeli technology companies, after selling their companies, convert USD to shekels. This has been a major factor for the strength of ILS – the constant flow of money due to start-up tech companies.

In addition, we should also consider vulnerabilities that have a direct impact on the currency, such as the zero interest or the sensitive geopolitical. In that aspect, the interest rate in Israel is relatively high when compared to other developed countries, and somehow, the geopolitical uncertainty has no longer impacts the Israeli economy, as it has been in the past.

Overall, the Israeli economy has displayed stable growth over the last years, and its central bank, despite all the domestic criticism, has been one of the most responsible and effective among Western countries.

So Why is the Shekel Still the Undisputed Champion of the FX Market?

Perhaps because there is no reason right now for the ILS to weaken versus any other currency in the market. The interest rate in Israel has been slightly above zero when the negative interest rate policy has been embraced by most central banks in the world.

A negative interest that was led in Scandinavian countries, Switzerland, or Japan countries, opened a new place for speculation in the form of carry trades. These countries also operated additional tools to weaken the currency including interference in the Forex market and bond purchases.

On the other hand, Israel until recently kept an intervention in the forex market as a tool against a weakening of its currency. But, as soon as the Bank of Israel stopped intervene in forex trading, the trend of strengthening was inevitable. 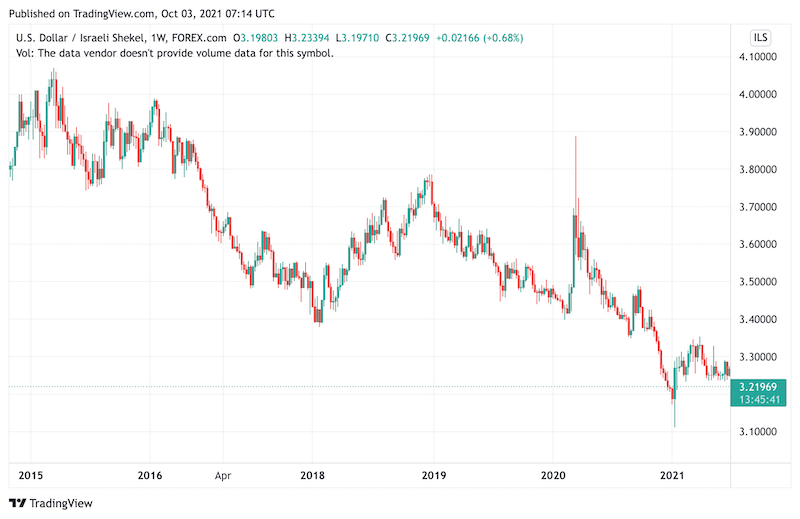 Still, the discussion of whether a strong shekel is good or bad for the economy remains relevant. There are arguments that support one side or another, but as in any dispute, the truth is somewhere in the middle. Not too weak, but at the same time, not the strongest in the world could be good for the Israeli economy.

Some of the reasons for the strength of the Israeli Shekel

Clearly, there are reasons why the Israeli Shekel continues to be one of the most resilient currencies in the world. These include:

What’s Next for the ILS?

So, what’s the forecast for the USD/ILS? According to some analysts, if the trend continues, then the USD/ILS might drop to 2.8-3.00 though this is an extreme scenario that could result in protests from Israeli exporters. On the other hand, the more likely scenario is that the Israeli Shekel will stay in its current range or rise up again to its previous equilibrium at around 3.5 and maybe higher.

Presently, there are two main reasons that could impact the USD/ILS. First, if the US stock market drops in the near future, then the Israeli Shekel will be trading higher. The second reason is not very predictable but certainly could be happening if the trend of the Shekel strengthing continues. That is – another intervention from the central bank of Israel.