Many of us may have used or come across the name bitcoin at one point in our lives. It is arguably one of the most famous forms of cryptocurrency going around today and will have a huge impact on the way people transact in the future.

But the real problem of bitcoin and cryptocurrencies is the high volatility. As long as these coins will not be stable, we cannot really use them as a medium of exchange. Think about it, would you like to get a salary in bitcoin, or pay someone else a salary in bitcoins.

For that matter, stable coins were created to keep cryptocurrency valuations stable. And, the most widely used and popular stable crypto coin is Tether USDT.

But, there’s a huge controversy about USDT and the company behind the coin – Tether Limited.  So, let’s have a look at what are the main issues of this coin, and could it be a huge pyramid that will explode at some point?

Just like we have noted before, there are many types of cryptocurrencies in the market today. Founded in 2014, Tether is among these digital assets and is currently rated the fourth-largest digital coin by market capitalization today, with its total market cap reaching up to $71.1 billion.

However, unlike Bitcoin and these other cryptocurrencies, Tether is a bit more different. It is referred to as a stable coin, meaning it is tied to other fiat currencies or commodities (Tether Gold). That means that Tether is tied directly to a price of a real-world asset, which in this case is the U.S. dollar.

Because of the frequency in fluctuations of other cryptocurrencies, something that may bring about dramatic volatility, this form of currency gives crypto investors a smooth way to stability and assurance of this investment growth.

It may come as a surprise to many of us when we hear that Bitcoin is not the most dominant cryptocurrency in the digital market today. Initially launched in 2014, Tether is the backbone of the digital economy per se. It dominates the digital trade and comes top as the most traded asset in the market. For example, Bitcoin has clocked 34.12 billion in volume, while Tether recorded approximately 84.8 billion as of November 3, 2021.

Unfortunately, the most important coin in the market today is also filled with a lot of controversies. Leading marketers and critics have expressed their fear over the transparency of the coin and the fundamental problems of issuing these large number of USDTs. Following several investigations and audits over the cryptocurrency holdings, reports have emerged on the unwillingness of the company to hand over all its data to clear the concerns. That has left critics believing that the company is sourcing its coins elsewhere rather than the digital market.

The controversy has put Tether in hot soup with the United States Department of Justice, which has launched investigations over possible fraud by its executives. On July 21, 2021, the department noted that investigations and scrutiny were underway on whether the company has concealed important information on bank transactions directly linked to crypto.

Notably, this is not the first time that Tether is finding itself in this kind of situation. It seems the company has been shrouded in controversies since its start, largely due to speculations that it is sort of a Ponzi scheme. After all, a private company cannot have these amounts of USD, meaning if something happens in the future, Tether USDT will not have a value.

What’s more? In 2018, the company was faced with yet another failure to conduct auditing that could have confirmed it received a backup from actual fiat currencies in its tokens. What followed after that were controversial reports about its possible artificial inflation of the Bull Run the previous year to help Bitcoin reach a record high during that period in 2017.

Is Tether really backed by USD? 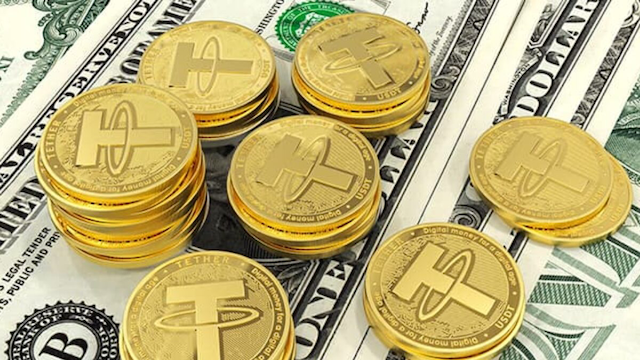 The recent controversies are yet again painting another negative picture of the company. Critics of USDT are now claiming a lack of actual backup of the currency by the U.S. dollar – The critical argument about this is its artificial-like props in the market, which they think is an eventual demise and collapse of the entire crypto market.

Despite Tether Limited’s claims, there is sufficient evidence to believe USDT is not 100% backed by the U.S. dollar. The company itself has given enough reasons to think the backing is not purely by the U.S. dollar. Also, let’s be realistic about it – it’s simply not possible.

Quoted in Forbes, the company had a series of changes in its transparency statement following criticisms on who backed up the coin. While the first one denoted the “professional audit” of the reserves, they later changed to “professional verification,” which also spurred criticisms. They finally settled on “daily” reserves on its currency backing.

However, some investors are still enthusiastic about the crypto markets and believe in Tether’s reserves. It remains the top way through which dollars come in and get out of the crypto exchanges despite this backing not appearing too credible as we advance.

Tether USDT conclusion – The good, the bad, and the ugly

Despite the many controversies, Tether moves on. The investigations are still ongoing, which makes it impossible to know the truth of the matter. To be sure, Tether remains one of the most significant coins in the market right now, and if you are a crypto trader – you kind of need USDT. That’s a good thing to have this coin in the crypto market.

The bad and perhaps the ugly thing about all this is the eventual demise it spells on its investors. Some will think that a day will come when it will collapse completely. With this, the cryptocurrency market is neither assured of its future too although many believe cryptos can replace money in the future. As a backbone to the digital economy, Tether would probably go down with the entire crypto market.

Come what may, this battle will continue to go on, but Tether will strengthen its market value further to support the growing interest in digital investment worldwide.