Well, did you know that up until 1979 Israelis actually lived in Iran? Even more, Iran was an exotic location for Israelis to live in and for centuries, the relations between the Jews and the Persians were generally smooth. So, what happened? And how did the diplomatic relations between these two nations deteriorate to this point? It all started with a tiny revolution that pretty much changed global international relations.

Iran and Israel – The history

The relations between the two nations dates back to over 2,700 years ago when Jews lived in Persia after they were expelled from Assyria by Shalmaneser V. Persia was, in fact, a safe place for Jews for many centuries, and the relations was nothing but good between these two cultural groups.

Iran was also the second Muslim country after Turkey to recognize the State of Israel after its inception in 1948. Though Iran has voted against the UN Partition Plan for Palestine in 1947 and opposed its acceptance as a member state into the organization, in 1950 the Iranian government recognized the state of Israel de facto making it one of the first Muslim countries to recognize Israel.

Eventually, the animosity between the two countries started in 1979 when the Islamic Revolution emerged. Since then, Iran and Israel are in a state of a cold war, and a constant threat of war. Moreover, both Iranian and Israeli citizens are banned from entering the other’s country.

However, despite the cold diplomatic relations, the two countries often hold similar political views as happened in the case of Israel’s support in Iran during the Iraq-Iran war, and the joint interest of both countries to eliminate the ISIS political group.

Iran and Israel – The Conflict 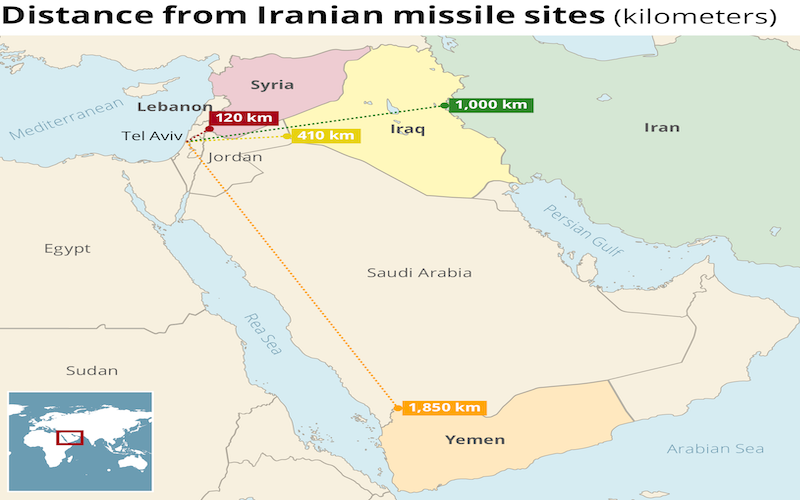 The Iranian-Israeli conflict is one that currently exists but with a strong lack of origins or motive. Simply put, it’s not very clear what is the reason for this conflict. It is not a result of a religious dispute nor a historical military wound, but rather a fight for strategic dominancy in the Middle East and cultural/social disagreement. Even today, many can reasonably wonder why the two countries are in fact enemies.

Generally, Iran and Israel do not share a border, and there’s not much hate between the two nations rather than pure governmental interests.

But even though there’s no joint border, the two countries are very close to each other (the shortest distance between Iran and Israel is 1,725.02 km) and fight for strategic locations in the Middle East region. Thus, the Iranian regime is secretly supporting the Hezbollah organization and presumably supplies the Palestinians with weapons and military equipment. Moreover, Iran has a huge economic and military interest in entering Syria and rebuilding the country once the civil war will end. With the involvement of the Iranian government in the rebuilding of the Syrian country, the conflict might escalate. More importantly, the Iranian regime is obviously concerned about the recent peace agreement between Israel and the United Arab Emirates.

You can summarise this dispute by saying – this one is right and the other is right. Judging it objectively – Iran has the legitimacy to develop a nuclear weapon as all of its enemies hold nuclear weapons (except Saudi Arabia which is supported by the United States). Israel, on the other hand, has a valid reason to try to prevent an Iranian nuclear weapon due to a supposedly radical Islamist regime that preaches for the elimination of the Jewish state. In the fullness of time, however, Iran will most likely achieve nuclear weapons capabilities.

On another note, the biggest risk for both countries is not necessarily a nuclear weapon but cyber warfare between Iran and Israel. Some of you might have heard about the Stuxnet cyberattack that was created by the intelligence agencies of the United States and Israel and was uncovered in 2010. Since then, the two countries are in cyber technology race.

Despite the constant tensions between the two countries, a real Iranian Israeli war is not very likely to happen. For the Iranian regime, attacking Israel involves many complications. In fact, Iran stands alone against Israel as it is not a realistic scenario to see Russia nor Chain getting involved with a war against Israel. Syria, which is one of Iran’s closest allies, is in a state of collapse and could not join Iran in a scenario of escalation. More importantly, if Iran goes against Israel, the United States will get involved as soon as possible. Israel, on the other hand, has no real motive to start a war with Iran, particularly with the ongoing Palestinian issue.

Ultimately, both countries strive to strengthen their dominancy in the Middle East, but at the same time, it seems that the current status quo works just fine. There’s no real reason to believe that a war in the Middle East between Iran and Israel is about to start and change the current borders.

The Economic Dichotomy of Turkey

When Was the Last Moon Landing and Why Haven’t We Been Back to the Moon for Nearly 50 Years???

The Armenia – Azerbaijan Conflict – What Are They Fighting For and Could It Be Solved?

Is This The First Time People Are Forced To Get Vaccinated?