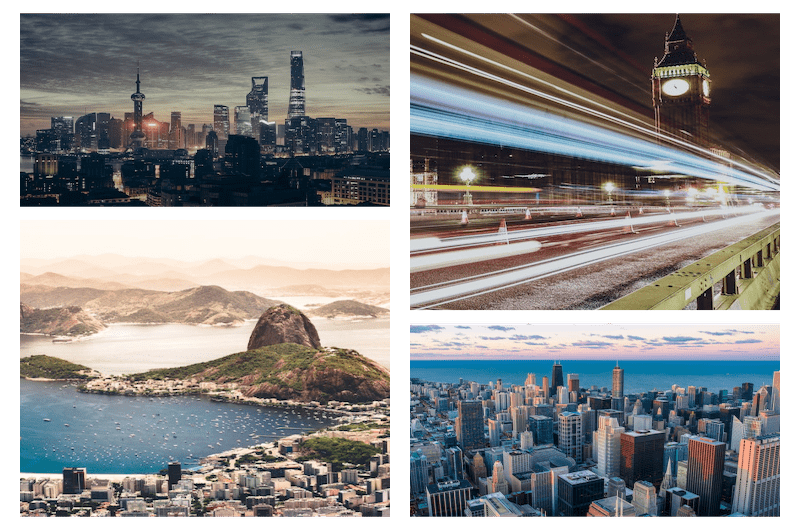 We all know the names of the largest cities around the world, we see the names of famous cities on the news, on an airport departure board and on TV. Some mega/big cities have beautiful names, a bit less casual than the older brother – the country name.

While some of the cities were established thousands of years ago, other cities are baby cities like New York city which was officially founded in 1624 and will celebrate its 400th birthday in four years.

Etymology – the origin of words and an interesting subject of its own – applies also to geographic locations such as countries and cities. You will be surprised by the meanings of some of the most world-famous cities.

Here are the 20 of the worlds most famous cities and the origin behind their names:

New York is the largest city in the United States with a population of 8.6 million people. The big apple was settled by the Dutch in 1624 who named the area New Nederland the south end of Manhattan Island New Amsterdam. During the second anglo-dutch war, the English took over the area and changed the name to New York, to honor the fifth Duke of York and Albany, James Stuart, who would go on to be King James II.

Fun fact: The name of the Wall Street originates from an actual wall that was built in the 17th century by the Dutch during the anglo-dutch war.

The windy city, Chicago, has a cool name but what if we tell you that Chicago actually means stinky onion???

There is a debate about the origin of the name of Chicago – One theory says that the name “Chicago” is derived from a French rendering of the Native American word shikaakwa which means stinky (smelly) onion because of the smell of the onions that grew in the watershed. Another popular theory is that it was named after a chieftain named Chicagou, and theories suggest that the origin name derived from the words “shecaugo” meaning “playful waters” or “chocago” meaning “destitute.

The etymology of the name London is uncertain. The name of London is derived from a word Londinium which was a settlement established by the Romans following the Roman’s invasion to Britain in 43 AD. Londinium was a commercial center in Roman Britain.

Yet, the origin of London is not clear with one theory suggests that the city’s name is derived from the name of King Lud who once controlled the city in the 12th Century.

Paris, the capital city of France, has received its name from the Celtic Parisii tribe, in the third century BC. Paris, the shortened version, became the official name of the city when King Clovis made it the capital of his kingdom, in 508 AD.

By the 12th century, Paris was the largest city in the western world. Paris is also referred to as the City of Light because it was the first largest city in Europe to use gas for street lighting and due to its huge role in the age of enlightenment.

Between the 10th century and the 12th, locals have built small settlements around the river Amstel which were eventually united by a large dam and named the village “Aemstelredamme”. The name Amsterdam is hence formed of Amstel and Dam.

By 1327, the name had developed into Amsterdam.

The Etymology of Berling is uncertain. The name Berlin has a Slavic origin and derives from the language of West Slavic inhabitants of the area. The word Berlin can be separated into BRL (later BERL) which means a swamp and the suffix in which is common in places names. Berlin’s is a dry land in a swampy area.

A misconception connects to city’s name to the German word for bear, Bär although it is common in German interpretation.

Surprisingly, Tokyo is a relatively new name. Up until 1868, Tokyo was named Edo which meant estuary. With the arrival of Emperor Meiji in 1868, the city has become the capital and was renamed Tokyo which means Eastern Capital. The integration of the word capital in capital cities in Asia is a common tradition.

The origin of Shanghai derives from the words ‘Shang’ which means up, upstream and ‘hai’ which means sea. There are two small rivers in Shanghai called “Shanghai Pu” and “Xiahai Pu”. Shanghai was established during the Song Dynasty and the name describes a town that was literally on the two rivers. Both Shanghai Pu and Xiahai Pu are now gone.

The simple translation of Buenos Aires is good airs or fair winds. But the story behind the name is not that simple – The city actually owes its name to the Virgen named Bonaira that originally belonged to the city of Cagliari, in Italy. The legend tells that in 1370 sailors have arrived at the beaches of this city with the image of the Virgin with the baby Jesus in one arm and a candle in the other. Eventually, she arrived in Río de la Plata, carried by two priests and a group of sailors commanded by Don Pedro de Mendoza who decided to name the city to honor Bonaira. Buenos Aires was named “Puerto de Nuestra Señora Santa María del Buen Ayre”.

During the 17th century, the short form “Buenos Aires” became the common usage for the city.

The city of Istanbul had been called by several names over the centuries with the most notable are Byzantium, New Rome, Constantinople, and Islambol. After the city fell to the Turks in 1453 it was still called Constantinople (even though it was the common name for the city in Turkish even before the conquest of 1453) and in 1923, the new Turkish Republic has changed the city’s name to Istanbul in order to prevent confusion and to formalize the city’s name. The name Istanbul was used by since the 10th century and derives from the Greek phrase meaning ‘in/or the city’.

The etymology of the word Stockholm is a question with no concrete answer. The simple translation of the city makes sense – the word stock coming from the Swedish word “Stokker,” which means log and the word holm means island. However, there is uncertainty about the use of the word stock. One of the theories for the word stock is that locals in ancient Stockholm used logs to mark important places. The first mention of Stockholm dates from 1252.

Oslo has an interesting name history – By 1314 Oslo was the Capital of Norway and was originally called Oslo. In 1624, a fire has destroyed the city and King Christian IV decided to change the name to Christiania and then from 1877 the name was spelled Kristiania. In the first of January 1925 the city’s name has changed back to Oslo.

One of the assumptions is that the meaning of the city’s name is the mouth of the Lo river while the other theory suggests that earliest versions of the name were ‘Ánslo’ and ‘Áslo’ which meant the meadow beneath the hill.

Cairo is the most populated city in Africa after Lagos with 19.5 million people. The city’s official name is al-Qāhirah which has several meanings including ‘the Vanquisher’, ‘the Conqueror’ ‘the Victorious’ and ‘Place or Camp of Mars’. The name ‘Place or Camp of Mars’ refers to the fact the planet Mars was rising at the time of the city’s foundation while the other names might refer to the arrival of Caliph Al-Mu’izz li-Din Allah in 973 AD.

The capital city of Russia has quite a simple etymology. The city’s first appearance dates from 1147 under the name Moskov which derives from the Moskva river. The name of the Moskva river is most likely originates from an ancient Finnic language and means a river at a wetland (dark water) or a marsh. Moscow has never changed its name.

The origin of the name Tehran is unknown and there are many theories for the meaning of Iran’s capital city name. One theory suggests that the name means ‘mountain slope’ or ‘the hot place’. Another theory is that the word Tehran derives from Tiran/Tirgan, which refers to “The Abode of Tir”, Tir being a Zoroastrian deity.

The origin of the name Barcelona is unclear and it has two tales for the way it got the name. The first states that the name Barcelona derived from Barke-no which was the original name of the city and was given by Iberian settlers. Another theory suggests that the name was originated from Carthaginian general Hamilcar Barca who supposedly founded it in the 3rd century BCE.

When the English arrived in Australia in 1788, the area Sydney was discovered by Admiral Arthur Phillips, who later named the harbor Sydney after Lord Sydney, the Secretary of State for the Home Office. The settlement was first named ‘New Albion’ and for unknown reasons, the name has changed to Sydney.

Delhi is a huge metropolitan with a population of almost 19 million people. There are many theories for the origin of the name Delhi: The first and the most common states that Delhi is named after a king of Mauryan dynasty, Dhillu or Dilu who supposedly built the city around 50 BC. Another theory suggests that Delhi could have also derived its name from the legend of king Anangapala II who erected an iron pillar with a weak foundation. Upon removal of the pillar, the snake’s blood was found on it, so he had it replace the pillar and his kingdom was thereafter considered dheela which means loose.

Lagos is the most populated city in Nigeria and Africa one of the most populated cities in the world with 17.5 million people. Lagos means lakes in Portuguese and was given by the Portuguese explorer Rui de Sequeira when he visited the area in 1472. Another theory suggests that the Logos was named after the city of Lagos in Portugal. The irony is that there’re no lakes in the proximity of Lagos as Lagos is an Island.