Japan is one of the most fascinating and mysterious places in the world. The birthplace country of word renowned samurais, the country that gave us the gift of animes and the taste of sushi. Japan is like a modern fairytale realm combined with more “Cyberpunk-lookalike” skyscrapers, a place that must be visited at least once in a lifetime.

As much as Japan has to offer we should start from somewhere. No city is more suited to introduce you to the Japanese culture than Tokyo would.

Japan has one of the most incredible foods you can think of. With one of the best functioning public transport around the globe and the newest technological advances out there, no other place can shed a light on this like the capital city of Japan can. Probably the most well-known city from Japan, Tokyo is the purest definition of an ultramodern metropolis.

Its skyscrapers will take your breath away, the busy ant-like pedestrians might overwhelm you with their sheer number. But rest assured, you can always take a break from all this outside fuss by going to the plea of restaurants and cafes from Tokyo. And if you don’t like modern restaurants, rest assured. Tokyo offers you a high number of unconventional ones, like themed cafes (robots, maids, cats, anime, etc). Who would not like to be served by Goku or some other childhood hero of ours? 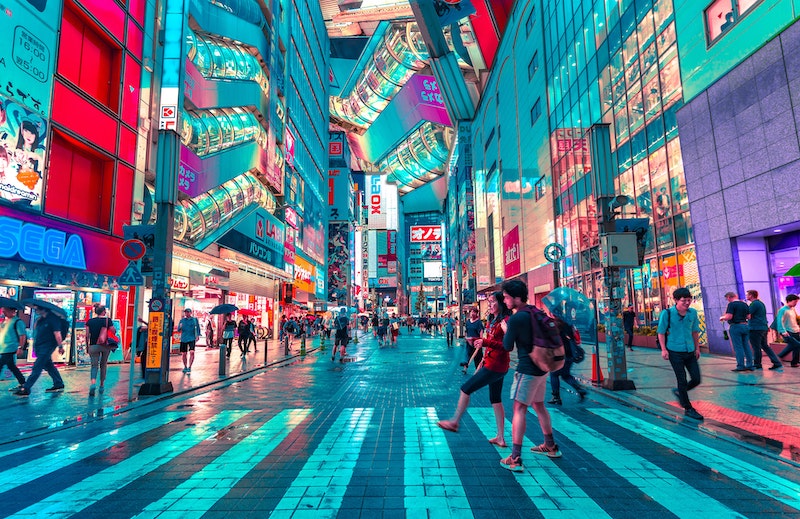 If you are in Tokyo you would probably don’t want to miss things like going for a walk across the beautiful Shibuya Crossing. You can also visit the famous street, Takeshita Street, full of new fashion trends. Or, if you like more “western” places you can go to the DisneySea or Tokyo Disneyland, both of them will guarantee you a lot of fun.

Kyoto is the opposite of the capital. The ultramodernism of Tokyo is replaced with a more traditional approach in Kyoto. Kyoto is home to a high number of temples and shrines found mostly on the outskirts of the city. So if you would like to experience the full package of the traditional Japanese culture, you need to leave the city center and go there. You will be fascinated by the impressive forests of bamboo, the people dressed in traditional kimonos, and all those flower gardens that will tickle your nose.

If you are finding yourself in this beautiful city and you don’t know what to do, you can wander through the gates of the Fushimi Inari Shrine. If you are a temple lover, then Higashiyama is the perfect place to be in. You can also take the train and visit the surrounding traditional villages, like the beautiful village of Kibune. You can also have fun on the streets of Gion, where you can try all sorts of vending machines and buy gifts such as nanoblock toys. And for some of you that don’t know what nano blocks are, think of them as Japanese “lego”, just smaller and more fun to build with.

This landmark is one of the most familiar ones when you think about Japan. The mountain is also the country’s highest mountain peak, totaling a height of 3,776 meters. The peak is visible even from the capital of Tokyo, which is located 100 kilometers away.

Since 2013, Mount Fuji has been recognized as an icon by UNESCO. Being the subject in many of the literature and art acts, Mount Fuji is visited by more than a million people each summer. If you are brave enough to climb it, you should be mentally and physically at 100 percent, since you will need nearly a day to finish the challenge. Although it might sound like an unnecessary thing to do, the reward will be worth it, as you will get to watch the sunrise from its summit.

As the country had been isolated from the world throughout most of its history, the culture had evolved separately from the rest of the globe. So it is important to keep that in mind when you first visit Japan.

The first thing you should know before arriving in Japan is that you should never leave a tip! The tipping does not exist in this country. Some of the Japanese might feel offended if you would pay more than the exact price. If you go to a restaurant you might be asked by a staff member to have your shoes removed, so you better have socks on all the time. If you are planning to visit some of the well-known public bathhouses, then you should cover up your tattoos with some tape. As in the Japanese culture, the tattoos are synonyms with Yakuza.

Last but not least, some of the public toilets can be a surprising challenge for some of you. The toilets in Japan have crazy electronic options that you won’t find elsewhere in the world. For example, some of them may have heated seats, noisemaker options, and deodorizers. On the other hand, there are many traditional Asian toilets too, which are built into the floor, so you would have to squat a little if you want to use them.

Japan is a fascinating realm, a mix of one of the most traditional places with one of the most high-tech technology stuffs you will find, including some of the most advanced and unique Virtual Reality facilities and applications. You won’t regret visiting the rising sun country.

The Top 10 Underground Places to Visit in the Philippines

How to Book Flights with Cryptocurrencies?

How to Book the Best Round the World (RTW) Flight Ticket?

Top Destinations for a Virtual Travel in 2021 and Beyond