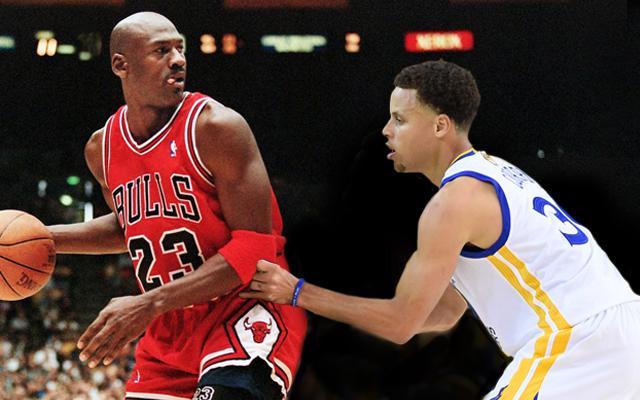 What if? we like to play the ‘what if’ game. It’s hypothetical, unnecessary, foolish in a way but it’s also fun and create a discussion. So, what if we could set up the perfect basketball game – The Golden State Warriors of the last four years vs the 94-96 Chicago Bulls.

Let’s take the 2018 Golden State Warriors as it seems to be the strongest team during the last four years, at least the most undefeatable according to the Playoffs (some will argue that) vs the Chicago Bulls 96.

On the other side, the 96 Chicago Bulls: Ron Harper, Michael Jordan, Scottie Pippen, Dennis Rodman, and L. Longley.

Offensively, there is no doubt about this matchup. Stephan Curry has more offensive tools than Harper and he could probably set the tone of this matchup. Still, Harper was a tough guy that had to focus on defense based on God’s requirements. Taller and stronger than Curry, he could cause troubles to the little guy but not more than that. Also, with Golden State’s small ball, the switches would make other players guard Curry. Jordan, Pippen, and Rodman could all handle Curry. Longley might have been a problem.

On the other side, Curry would have had a hard time with any of the Bulls’ guns. The Bulls would probably do the same as the Cavaliers did – try to switch over to Curry for a miss match. Jordan, Pippen, and Kukoc on Curry – trouble for Steve Kerr (regardless if he’s Golden State’s coach or guarding Curry).

What a matchup! Ok, still, it’s Jordan. If Tom Brady and Lebron James guard him together, he will make it. But, for those who did not notice, Klay Thompson is one of the best defensive players in the NBA. Jordan would score his 35-55 points per game but maybe, just maybe, Thompson could frustrate him a bit.

On the other side, Thompson could wear out Jordan, he moves a lot on the court and when he has his crazy energy and the hot hand, not many players can actually stop him.

It’s getting better. If this game (and this article) was not hypothetical, that is the matchup to look at. Scottie Pippen was the Bulls’ engine. If Durant could stop him of running the business and he can, the Bulls would have a big problem. Honestly, not sure about this matchup. Pippen could not stop Durant of scoring, no one can, but he could get him mentally out of the game (sometimes, it happens to Durant). Pippen was a unicorn before Durant knew what it means. I would say this matchup is a tie.

One thing for sure, we would have seen a lot of fighting, trash talks and technical fouls between these two. They are kind of similar players – both are not statistically amazing but do the small things to win. Green has more offensive tools and more impact on his team. Rodman, on the other side, would drive him crazy. All in all, Rodman could have been bigger trouble to green than the other way around and the Warriors than the other way around.

Ironically, both teams had their Achilles heel at the Center position. Longley was actually a good offensive player and would have an advantage over Pachulia. Mcgee was amazing in the playoffs when he played. Longley could not guard him, he is quicker and more athletic than Longley. Not a matchup that will decide this series.

The Warriors bench is one of their biggest advantages. Not only that players such as Iguodala, Livingston, David West, and others can change the game – they fit into the system perfectly. Iguodala could have been a perfect addition to guard Jordan, Pippen, and Kukoc.

The Bulls had a pretty good bench but not the same as the Warriors.

Steve Kerr vs Phil Jackson, I like it. Both come from the friendly approach to coaching. In terms of tactics, Jackson had a better game plan than Kerr. The Bulls were a flawless structured team, unlike the Warriors that occasionally lose control of the game.


So, Bulls or Warriors?

What do I know? It’s sports. Anyhow, if you look at all the parameters, the Bulls are a stronger and a stable team than the Warriors. It’s different times, different game. It could have been an amazing game, not just because those are two of the best teams in the history, but also cause of their nature, game style, players, coaches, and the killer instinct.

If I have to choose, I take the Bulls… then again…say your guess.