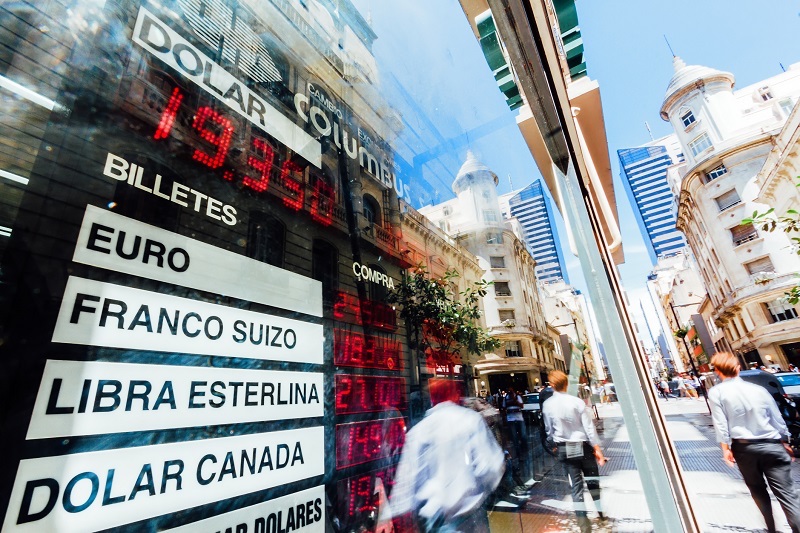 Argentina’s economy is in turmoil as investors are concerned about the country’s political future following Mauricio Macri’s loss in the presidential primary vote. Investors across the globe and Argentinian citizens fear the new populist candidate Alberto Fernández that supports state control in the economy and opposes a large trade deal with the European Union. Share market in Argentina has recorded the biggest decline in decades and the Argentinan Peso spiked to a new all-time high above 60 on concerns of the return to power of the Peronists movement in the country.

The MERVAL, the main stock index on the Buenos Aires stock exchange has collapsed last week at 38% after the current president Mauricio Macri was defeated in a major gap in the pre-elections by  the left-wing candidate Alberto Fernandez, who is supported by Cristina Fernández de Kirchner, the former President of Argentina and is the number two in Fernandez’s party.

Last week, the Argentine Peso sank by more than 30% versus the US dollar, before recovering after the central bank interfered to save the currency, and sold about 50 million USD. The benchmark interest rate in Argentina spiked to 74.8% but ‘settled’ at 55.99%. Moreover, Argentina’s economy minister resigns following the crisis, saying that a ‘significant renewal’ is needed.

What’s the fuzz about?

Argentina has suffered a number of economic crises since the early 20s of the previous century and has never been able to form a stable economic growth. The 48% plunge in the stock market on Aug. 12 was the dippest fall in the history of the Argentinan economy.

The catalyst was the victory of the left-wing candidate Alberto Fernández in the presidential primary by more than 15 points which will make it harder for Mauricio Macri to remain in power. As the parties have already chosen their presidential candidates, the primary elections give a strong indication of voting preferences.

The swing of economic policies in Argentina is a huge obstacle and Fernández will promote the Peronism economic policy while scrapping Macri’s economic reforms. Analysts are aware of the adverse global and national economic implications that might occur in the Peronist new regime.

The steep decline in the Argentinian Peso and the stock market will also force the central bank to maintain high-interest rates, which remains a burden for economic growth. Though Macri will stay in the race, it seems unreasonable that he will defeat Alberto Fernández as his policies caused the current turmoil.

“This is insurmountable; they are not going to recover from this, The new government is going to be Peronist,” said Dardo Gasparré, an Argentinian economist and political columnist.

Mauricio Macri was implementing liberal economic reforms during his presidential campaign which have failed to show any economic recovery. Fernández, obviously, blames Macri’s government for the economic turmoil, which has taken on billions of dollars in foreign debt since taking office in late 2015.

The only hope left for Macri now is to convince the people in Argentina that global financial markets are not excited with Fernández and the international economic connection can be negatively affected in case Fernández prevail the elections.

The implications of the Argentinian elections

In Buenos Aires and the rest of Argentina, residents are affected by the economic recession and inflation of 54.40% as of July 2019.

If Fernandez wins the elections, he will cancel a large part of Macri’s economic reforms, which can terminate the open trade deal between Argentina and three other South American countries with the European Union. The deal, which was achieved in June, and comprises Argentina, Brazil, Uruguay, and Paraguay, and the European Union can be a long-term loss for the Argentinian economy.

Mauricio Macri’s credibility is at its lowest levels. Last year, concerns rose on Argentina’s ability to pay its debts, inflation is at high rates, employment is at 9.7%, and the economic recession continues.

Fernández has already done it before during 2003-07 while he served as cabinet chief. He is known to the public as an honest candidate and the comeback of the ex-president Cristina Kirchner helps Fernández to get votes. Fernández and his party have some serious economic issues to deal with – the massive foreign debt, inflation and devaluation, currency stabilization, and regain the confidence of investors.

Fernández represents the alternation. His economic policy might improve the current economic situation with subsidies and more social care for citizens, however, the citizens in Argentina fear that the same economic policy that failed them from becoming a leading economic force is still here, two months away.