You may have heard the name “Dogecoin” several times recently. It’s a cryptocurrency pretty much similar to Bitcoin or Ethereum but was initially created as a joke. But ironically, in 2021, Dogecoin became one of the most widely discussed topics and the hottest crypto of the year.

Somewhere around January, its prices started to soar with more and more people investing in it. Eventually, it became the fifth-largest cryptocurrency in terms of market capitalization, with a valuation of $63bn!!! according to CoinMarketCap. There are some particular reasons why Dogecoin gained so much prominence in the market about which we will talk below.

What is Dogecoin, and what was it created for?

Dogecoin was created in 2013 by two software engineers Jackson Palmer and Billy Marcus, who sold all his Doge and bought a Honda Civic six years ago. The cryptocurrency was created for a joke, in two hours, as Marcus stated in one of his tweet answers, and was inspired by a meme representing a Shiba Inu dog having some writings on it in broken English.

Compared to Bitcoin, for example, Dogecoin does not have any lifetime cap on the number of its coins. Bitcoin, for instance, has a maximum possible number of coins that can be mined –  This number is 21 million BTC (18.7 million of which is already mined and circulated). If all BTC is mined, there won’t be any possibility to mine BTC anymore. It’s one of the main reasons why BTC is so valuable, as it is sort of an alternative or a solution to the current system of printing money. Unlike Bitcoin, Dogecoin already has 129 billion circulating supply, whereas new Doges can be mined and created still.

How Dogecoin became so popular?

But the main reason for creating Doge is not only for memes. As Marcus wrote in one of his emails, Dogecoin also aimed to bring some fun and make the elitist crypto market a bit inclusive. And they succeeded: Dogecoin is not just a joke anymore; it’s one of the hottest and most talked cryptos in the market. Doge entered the crypto market with a trading price of $0.0002, and up to the year 2021, its prices didn’t exceed $0.02.

However, Dogecoin prices exploded in value in 2021 and gained over 5000%. One of the reasons why Doge became so popular is that it is PR-ed by some famous people, with Elon Musk being the loudest Dogecoin supporter.

Doge Barking at the Moon pic.twitter.com/QFB81D7zOL

Musk’s interest in cryptocurrencies, however, started posting about Bitcoin. He even wrote the word “Bitcoin” in his bio once. But then his tweets gradually shifted to the Doge, and he started writing lots of strange stuff about this coin, such as “Just one word: Doge,” “Doge to the Moon,” “Who Let the Doge out,” “Doge spelled backward is Egod” and so on. And the culmination for all this is the famous meme representing Elon Musk holding the Doge to the sky with lots of others, following it. 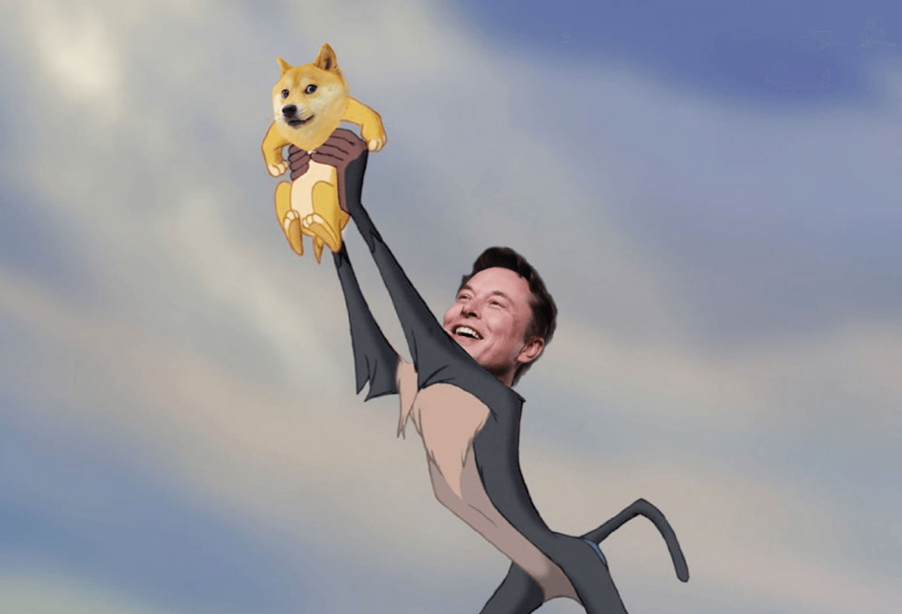 All these conversations have drawn lots of attention towards this crypto, with more and more people investing in it. This resulted in Dogecoin price growth that eventually hit its all-time maximum on May 8th, reaching up to $0.7. Elon even created a poll on his Twitter account asking if people want Tesla to accept Dogecoin.

In contrast to this, Musk also advised investing with caution even though Dogecoin is promising. Tesla CEO also talked about Dogecoin during his SNL appearance on May 8th in one of the humorous sketches called “Dogefather.” During the sketch, Elon, as “Dogefather,” was trying to answer the interviewer’s question, “What is Dogecoin” but he didn’t seem to succeed as the interviewer kept asking what it is.

This conversation finally led to the interviewer asking, “So, it’s a hustle?” to which Musk replied, “Yeah, it’s a hustle,” and laughed. While the majority was waiting that the Doge prices would grow after Elon’s appearance on SNL, quite the reverse: Doge prices started to drop, fluctuating between $0.4-$0.6. Many associate this with Elon’s calling it “a hustle” during the show.

How to Buy Dogecoin?

So, after all these discussions, is Dogecoin a good investment, and how can you buy Dogecoin?

One problem with cryptocurrencies is that the market is already filled with several different cryptos, so you may think that they are all the same things. However, some of them are already established projects that bring lots of changes and improvements to the market; others stand out with their solid objectives and goals set for the crypto project; other cryptos are just created for fun. Dogecoin is among the third group. It’s a somewhat speculative asset with unpredictable prices, so you cannot be sure if its prices will drop or rise in the future. This is one reason why we should not consider Dogecoin a good long-term investment.

Bitcoin, for example, is an already established crypto and what makes it appealing is that it limits the number of its coins that can be circulated. This makes Bitcoin valuable, and for this, it is sometimes considered “a digital gold.” Many other interesting and promising crypto projects also exist with strong objectives, including Filecoin that aims to revolutionize the digital storage industry; Dent, which wants to bring changes to the mobile data usage process; Terra coin with its family of stable coins, etc. But Doge is created just for a joke and does not have any strong plans for the future (except the speed of its transactions).

If you take your money seriously, you have better avoid investing too much in Doge. However, if you have some money and want to gamble with it, you can experiment with this crypto and invest in it, and maybe you will succeed. It’s worth mentioning that some crypto and financial analysts consider this a bubble that will soon burst, so you had better treat this process as a game.

HBTC is one of the most transparent crypto exchange platforms that support several cryptos, including Doge. This Singapore-based platform is the rebranded version of the BHEX company.

Binance is one of the most recommended crypto exchanges for UK residents that stands out with lower fees. Binance does not accept US residents.

Here are some more options to buy Dogecoin:

Tatevik Chukhuryan
Tatevik is a linguist who is interested literally in everything - from the smallest atoms to supermassive black holes, to tiny microbes to giant dinosaurs.  Always in search of new mind-blowing phenomena to explore and write about them.