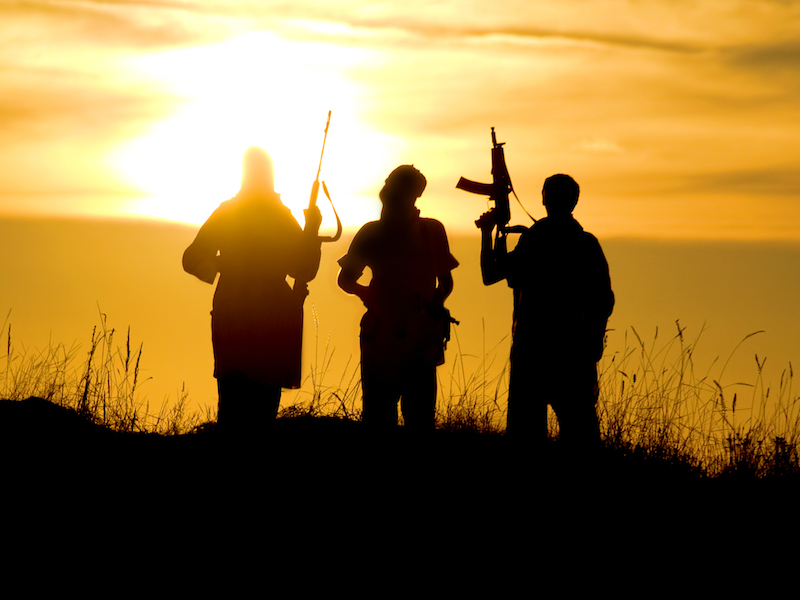 Terrorism is an undefined term and concept. The definition of a terror group refers to the ‘use of violence by a group against civilians that has been done through intimidation, coercion or instilling fear to attain goals that are political, religious or ideological’.

According to Wikipedia, there are 198 terror groups/organizations that are designated by other national governments and the international community. In this article, we list the biggest 15 terror organization in the world:

The list above is based on the number of troops/members, the wealth of the organization and the terror the group has succeeded to spread. Obviously, as terror groups operate under the radar, the data is not completely accurate and is based on estimations, rumors, and quotes.

The Islamic State of Iraq and Iran is probably the most well-known terror organization since Al-Qaeda. The group has managed to recruit members through social networks, videos and became popular in Arabic countries but also in Western countries.

In 2014, at its peak, the Islamic State’s annual income stood at around 3 billion dollars, making it the richest terror organization in the history. At that time, the Islamic State ruled over 100,000 kilometers and 10 million people.

Since then, ISIS lost most of its land and therefore, a significant amount of its income. In 2017, ISIS’s total income was around 200 million dollars.

Led by Qasem Soleimani, Quds force is a special force unit of Iran’s Revolutionary Guard. Quds force’s number of troops is estimated at 15,000. The group is responsible for Iran’s military action outside of the Iranian border and reports directly to Ayatollah Khamenei, the supreme leader of Iran.

The radical group in Nigeria, Boko-Haram, was estimated to have at least 15,000 fighters in 2015 according to Amnesty. The Council of Foreign Relations estimates 6742 casualties as a result of Boko Haram’s violent activities.

Hezbollah, basically a branch of the Iranian government, is estimated to receive annual funding of 200 million dollars per year (some estimates that today funding has increased to $800M). The organization’s number of troops is estimated between 20,000-50,000.

Hezbollah controlled areas include the south of Lebanon, in Beirut and its surrounding area, and in the northern Beqaa valley and Hirmil region.

As of 2014, the estimation for the Taliban’s size was around 60,000. As to financing the organization, the Taliban, similarly to ISIS, has an effective financial system. The Taliban controls a large area and therefore, they are able to generate systematic revenue from their population. The Taliban main income comes from the production and trade of drugs (opium and heroin). A secondary income comes from minerals mining – copper and iron. The annual income is not clear but there are estimations of 200-800 million per year. Although the Taliban has lost its ground in Afghanistan since the US invasion, it remains one of the richest and most powerful terror organization in the world.

The Gaza strip has a total population of 1.8 million civilians in 365 square kilometers, making the area one of the most populated areas in the world. For the past ten years, the Hamas seized power over government institutions and the population. As a result, Hamas has a fixed income from the Gaza Strip population and a constant contribution from Iran and Qatar. Hamas is estimated to generate an annual income of 700 million dollars per year.

Hamas is estimated to have about 25,000 fighters.

Tracking Al-Qaeda’s network is not that easy. The Islamist network has branches in many areas, mainly in the Middle East and Central and Western Africa. But it’s not so difficult to guess that Al-Qaeda maintains a stable financial network since the ’80s. Al-Qaeda first donator was Bin Laden and Donations of wealthy Saudis, Kuwait, and other Gulf states remain an important income. Heroin production and trafficking is an additional income for the organization. It is estimated that Al Qaeda has a yearly turnover of 150-300 million dollars.

The Al-Qaeda size is hard to measure as it spreads out in many areas.

Al Shabaab, an Islamic fundamentalist group that operates in Somalia and neighboring Kenya, was founded in 2006 and is a part of Al Qaeda’s network. As of 2017, Al Shabaab is estimated to have between 7000-9000 members.

Although Al-Shabaab is part of Al-Qaeda, it obtains its own income, mainly through kidnapping and ransom, taxes in the area of control, pirate activities, trade, and donations. Al-Shabaab is estimated to have an annual turnover between 50-150 million dollars. The Al-Shabaab group has succeeded in its goal to intimidate the population in Kenya, Somalia, and Mozambique.

Although the Haqqani network is a part of the Taliban, the group maintains an independent financial system.

The Irish Republican Army is perhaps one of the most ancient terror groups formed in 1917 with the ideology to establish a republic Ireland, to end the British rule in Northern Ireland and to reunite all of Ireland. The IRA has changed several leadership and names – makes it hard to track either its size or funding. However, the organization continues to operate terror activities in Britain.

Based in Turkey and Iraq, PKK is fighting for the Kurdish people against ISIL. According to Turkish officials, PKK has 32,800 active members as of 2015. The PKK has several sources of income including drug trade (mainly heroin), human trafficking, tobacco trade. The PKK also has many supporters and tax revenues from the Kurdish community.

According to the UN Office on Drugs and Crime, the PKK’s revenue from heroin is estimated at around $75 million dollars.

The PKK’s terror activities against the Turkish government and occasionally Turkish civilians have created fear on the Turkish side.

The PIJ (Palestinian Islamic Jihad) was originally established in 1979 in Egypt but after the murder of the Egyptian President, Anwar Sadat, the movement has started to operate in Gaza strip. The main goal of PIJ is the establishment of the Palestinian state and the destruction of the Israeli/Jewish state. The organization has been responsible for many attacks against Israeli institutions and civilians. The organization is supported by the Iranians and is estimated to have an income of around 100 million per year. The PIJ has around 8000 active members.

Located in Pakistan, Lashkar-e-Taiba main goal is to oppose India’s sovereignty over Jammu and Kashmir. The group has several thousand active members and has an annual income of around 75 million, mostly from donations.

Among the big terror organizations, Farc is the only one to operate in South America. The Revolutionary Armed Force of Colombia is a Marxist-Leninist terror group with an estimated net worth of 600 million dollars. The group is considered to be one of main illegal drug trafficking organizations in the world. Farc activates terror attacks against the Colombian government and uses kidnapping as bargain method.

Part of Al-Qaeda, the Al Nusra Front was established during the civil war in Syria with the ideology to form an Islamic state in Syria. Front Al Nusra number of fighters range between 10,000-20,000. Al Nusra Front financial status is unclear but as it’s a branch of Al Qaeda and maintains a close relationship with ISIS, it’s most likely to have a large annual income.

Can the western world win the war against terror?

From the point of view of the western world, there is a constant battle against terror. In terms of war strategy, it’s almost impossible to eliminate terror organizations and their activities. Terror organizations settle in various areas, fight in guerrilla strategies, usually with the ability to hide, protect and surprise those who come to attack them. In addition, it’s difficult to stop the funding into terror organizations – in particular with the technological advancement that ironically, make it easier for terror organizations. Cryptocurrencies and Bitcoin have created a perfect solution for a terror organization as the money transfer remains anonymously.

The battle will continue – official governments versus terror groups or, western countries versus funded terror organizations. The battle is far from being over.